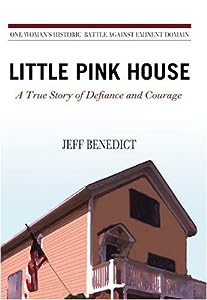 Kelo v. City of New London is moving from a court case of a lifetime to a movie on the Lifetime Channel.   The movie is based on the book “Little Pink House” about Susette Kelo and the Fort Trumbull section of New London’s fight against eminent domain for redevelopment purposes.  Susette Kelo’s story became famous the United States Supreme Court released its opinion in the Kelo case in 2005.  Actress Brooke Shields has been cast as Susette Kelo in the biopic.

The movie is the latest in a series of movies and musicals focusing on eminent domain.  “Greetings from Asbury Park” tells the real life story of a 91-year-old immigrant who is being displaced from her seaside bungalow after living there for 50 years.  “Split Ends” tells the tale of mom and pop shops who are being run out of their tiny little town through eminent domain so a new mall can be constructed in the area.

“‘Little Pink House’ to be a Lifetime Channel Movie” at TheDay.com

“Filmmaker captures fight to save Asbury Park home” at NJ.com

Musical puts the spotlight on community at Boston Globe

For more blog posts on the Kelo case, please see the following:

The author wishes to acknowledge the assistance of Cory K. Kestner, Esq., of McKirdy & Riskin, PA, in the preparation of this article.